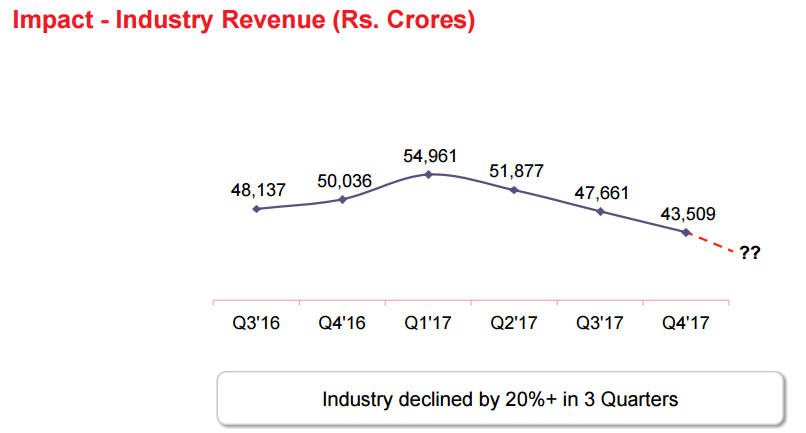 India telecom operators are currently looking for life saving support system from the Government in order to improve their business conditions.

Following the launch of Jio 4G service, the entire viability /  intent of current IUC has been destroyed. The traffic asymmetry with Jio is extremely high – 92 percent incoming calls vs. 8 percent outgoing – which has led to transfer of cost from Reliance Jio to incumbent operators.

Government should correct IUC and fix at full cost incurred by the terminating operator.

Airtel said TRAI should be restrained from any further reduction till the matter is adjudicated in the court as it would cause an irreparable financial loss to Airtel and other similarly placed operators.

Currently telecom operators pay 8 percent of AGR as license fees, of which 5 percent is contribution towards USOF.

Since the Indian Government is not using majority of the USOF levy effectively, the government should reduce license fees from present 8 percent to 3 percent.

Currently the SUC regime has become complex due to multiplicity of rates to different spectrum. Current SUC regime leads to anomalous results and greater tax burden on the subscriber. Current charges are also exceptionally high compared to other Asian economies and other developed telecom regimes wherein SUC is only taken to account for administrative costs.

Government should look at reducing the SUC rate to 1 percent of AGR. SUC for microwave spectrum should be subsumed into proposed 1 percent SUC rate.

The current SUC order mandates payment of SUC subjected to floor rate. Since, the revenues have dropped in 2016-17, benefit of SUC rate reduction to minimum 3 percent of AGR last year could not be realized due to the mandated floor

Interest rates should be linked with 10 year G-Sec & benchmarked each year. GST rate should be a maximum of 12 percent.

Operators should continue to have the right to retain customers through offers and discounts – this is a fundamental right in any business.