Computer equipment spending will stage a modest improvement, with stronger demand for tablets offsetting sluggish demand for servers and storage devices, resulting in 2.8 percent growth in 2017 and 4.8 percent in 2018.

Communications equipment — routers, switches, broadcast equipment, Wi-Fi equipment, PBXs, and smartphones purchased by firms for employee use — will achieve growth rate of 1.3 percent in 2017 and 2.7 percent in 2018. 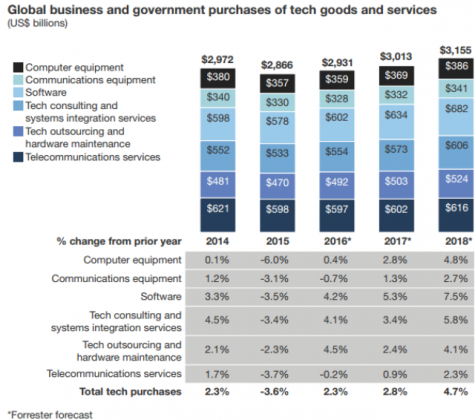 Forrester expects that the consolidation of service providers will spread to other countries and will limit carrier demand for networks over the next two years.

Verizon’s acquisition of XO Communications, the merger of Windstream and Earthlink, CenturyLink’s acquisition of Level Three, and AT&T’s prospective $85.4 billion purchase of Time Warner Cable are evidence of consolidation in the US market.

Forrester said that the spending on technology goods and services – including both IT and telecom — by businesses and governments will grow 3.2 percent in 2017 and 3.9 percent in 2018.

“Slower growth is expected due to the adoption of new technologies, as well as political uncertainties that emerged in 2016,” said Forrester.

Gartner said worldwide IT spending is projected to grow 2.7 percent to $3.5 trillion in 2017.

The worldwide IT services market is forecast to grow 4.2 percent to $938 billion in 2017. Buyer investments in digital business, intelligent automation, and services optimization and innovation continue to drive growth in the market, but buyer caution, fueled by broad economic challenges, remains a counter-balance to faster growth.