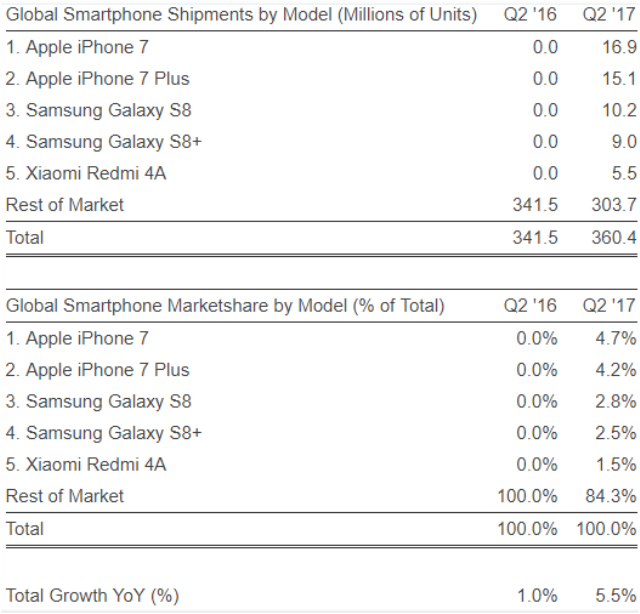 Samsung Galaxy S8 and Apple iPhone 7 were the world’s first and second best-selling smartphone models in the second quarter of 2017, according to the latest research from Strategy Analytics.

Samsung’s S8 and S8+ smartphone models together shipped 19 million units in the second quarter of 2017.

Global smartphone shipments reached 360.4 million units in Q2 2017. The top-five most popular models together accounted for 1 in 6 of all smartphones shipped.

“The iPhone 7 remains the world’s most popular smartphone model overall, due to a compelling blend of user-friendly design, extensive supporting apps, and widespread retail presence for the device,” said Juha Winter, senior analyst at Strategy Analytics.

Apple iPhone 7 Plus, with its bigger screen and higher pricing, shipped 15.1 million units for second place and 4 percent share in Q2 2017. Apple accounts for two of the world’s top five smartphone models.

Xiaomi Redmi 4A shipped 5.5 million units for fifth place and 2 percent share. Xiaomi is becoming popular across Asia. Xiaomi is now the fourth largest smartphone vendor in China and the second biggest across India.

Xiaomi is selling a large volume of smartphones through online channels, with key distribution partners such as Flipkart and JD.

Foxconn, Wistron and Pegatron to boost smartphone manufacturing in India 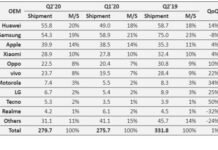