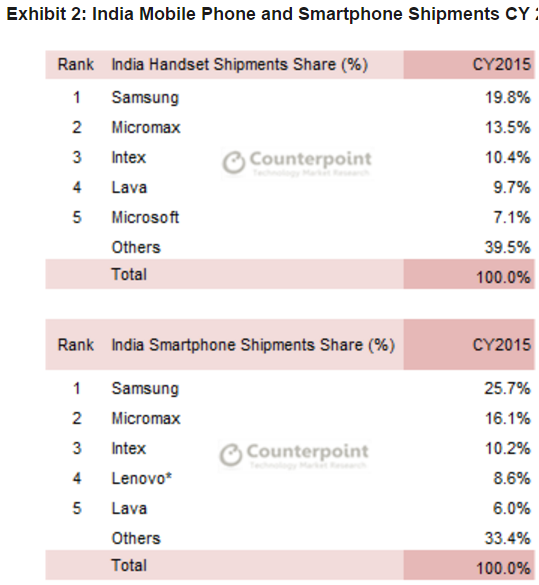 India Smartphone user base grew to 220 million users by end of 2015 surpassing USA for the first time ever.

More than 40 percent of the mobile phones shipped were smartphones.

More than one in two smartphones shipped during the quarter were LTE smartphone.

Almost half of mobile phones sold during the quarter were “Made in India” with 20+ mobile phone brands now assembling their phones in India.

Domestic brands such as Intex and Lava have closed the gap with the second largest mobile phone or the number one domestic mobile phone brand Micromax.

Almost one in three smartphones were sold through online channels during the year.

Samsung has a share of 23.6 percent in overall mobile phone market and 28.6 percent in the smartphone segment in Q4.

Samsung’s J series drove volumes for the Korean giant as it ramped up the series by launching multiple SKUs in the entry to mid-level segment.

Samsung led the LTE smartphone segment during the quarter.

Micromax has market share of 13.7 percent in overall mobile phone market and 14.3 percent in smartphone segment.

Micromax was the number three LTE player during the quarter

Lava (excluding Xolo) maintained the fourth spot in the overall handset market and 7 percent share in the smartphone market in Q4 2015.

Lenovo including Motorola raced to third position in smartphone segment for the first time ever in India surpassing Intex with a market share of 11 percent during the quarter.

Apple achieved a landmark – crossing 2 Million units in a calendar year for the first time ever in India. Apple commands 2 percent volume share of smartphones.

Microsoft lost its place among the top five brands in a quarter for the first time ever as Lumia shipments declined sequentially and annually.

Huawei (with Honor), LeTV and Vivo will expand their offerings this year. 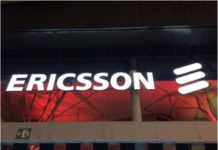