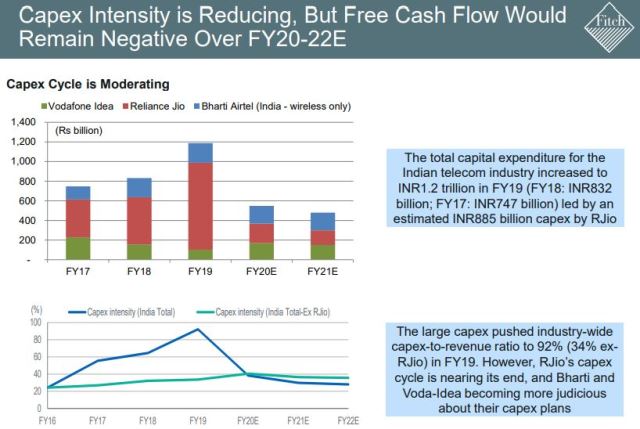 The Capex of Reliance Jio, Vodafone Idea and Bharti Airtel will be almost equal during the fiscal 2020 and 2021.

Reliance Jio Chairman Mukesh Ambani said its Capex cycle is nearing its end. Airtel CEO Gopal Vittal earlier said the company would cut down its Capex during the current fiscal.

Vodafone Idea, according to Goldman Sachs report, may down size its operations due to cash crisis. Vodafone Idea just appointed a new CEO to revive its dwindling revenue market share in India.

The gross debt of Vodafone Idea, Airtel India business and Reliance Jio at end-FY19 stood at INR 3.9 trillion, implying gross leverage of over 8x for the Indian telecom sector.

The proportion of data subscribers in total subscribers for Airtel and Vodafone Idea increased rapidly to 41-44 percent in 4QFY19 from 28-33 percent in 1QFY19.

Airtel has been a reporting steady growth in data traffic, and with average monthly usage of 11 GB/user, overtaking Jio in data consumption.

Reliance Jio is expected to deliver 30-35 percent annual revenue growth as against flattish revenue for Vodafone Idea / Airtel India business. Reliance Jio’s revenue growth will be aided by increase in subscriber base and growth in ARPU.

Jio will report superior EBITDA margins, whereas margin profile of Vodafone Idea and Airel will recover over next 2-3 years.

Competitive intensity in the telecom industry has elevated with Reliance Jio’s data tariffs that are 25 percent-30 percent lower than those of Airtel and Vodafone Idea.

Reliance Jio’s market share is expected to increase to 40-45 percent by FYE22 from around 30 percent in FYE19. Airtel / Vodafone Idea’s joint market share will drop to 25-27 percent each from 30-33 percent. 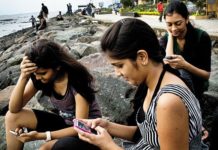 Revenue and Capex forecast for Airtel, Vodafone and Jio